New chemical knowledge and new chemical legislations can cause phosphate fertilisers containing ammonium nitrate and other ingredients to be classified. These types of product might be classified as hazardous to humans and also to the environment.

Over the years ammonium nitrate fertilisers have been involved in several accidents that have influenced the legislation of transport, storage and handling. Decompositions during transport and in storage have caused release of toxic gases and hazardous situations. 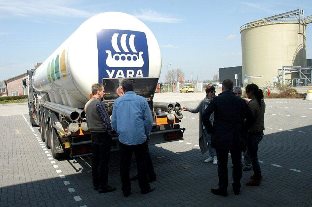 United Nation has issued the Globally Harmonized System of Classification and Labelling of Chemicals (GHS). The GHS is harmonized with the UN Recommendation on the Transport of Dangerous Goods – Model Regulation, regarding test methods and identifying hazards. Europe has adapted the European version of the GHS and issued the Classification and Labelling of Products (CLP).

AN 33.5 is classified as an oxidizer (Class 5.1) by UN due to its high ammonium nitrate content. Special regulation for storage is given by national authorities. Yara ammonium nitrate based fertilisers pass the resistance to detonation test, and have very high resistance to detonation. When bagged fertilisers are involved in a fire, the bags may melt and break, but they will have insignificant effect on the fire.

Spillage from conveyor belts or from bags should be collected quickly, handled and sold as normal product if free from contamination and meeting the requirement of the fertiliser regulations. 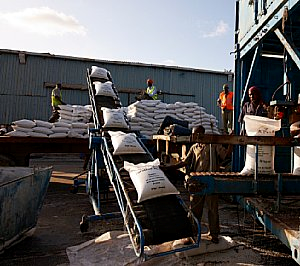 If not, the material shall be dissolved or be made inert. If seriously contaminated, product should be treated as a waste material, and hazardous material should be handled according to local legislation.

In addition to the CLP Regulation in Europe, storage of ammonium nitrate containing fertilisers are regulated under the COMAH (Seveso) directive. Some European countries like Germany and France have additional national regulations, TRGS in Germany, Code de l’environment in France, controlling the storage of these products. These types of national regulations are becoming more common and need to be checked locally.

Ammonium nitrate in NPK fertilisers can decompose at high temperatures. Exothermic reactions cause evolution of heat and gases from the fertiliser after an initial period with decreasing pH. The rate of decomposition accelerates in the presence of chloride, organic substances and some metal ions – particularly copper (Cu2+). The decomposition is retarded in the presence of phosphate, carbonaceous material and high pH.

Some ammonium nitrate based NPK fertilisers exhibit characteristics of self-sustaining decomposition (SSD). SSD can be initiated by accidental heating (> 120°C) over time for some fertilisers. Such decomposition will continue after the heat source has been eliminated, and can be very difficult to extinguish. The decomposition is normally not dangerous in itself, but the released gas contains toxic components (e.g. Cl2, HCl, NO

CN fertiliser contains approximately 15 % crystal water that minimises the oxidising properties of the material. fertilisers based on nitric acid ammonium calcium are classified in GHS/CLP as “Acute Tox, 4 H302., Eye Damage/Irritation, H318”. The product bags are labelled according to the appropriate chemical regulations. No severe accident has ever occurred with CN fertiliser.

Urea products are not classified as hazardous material according to (EC No. 1272/2008) , CLP) and the UN transport regulations, but are potentially dangerous because they can release ammonia if exposed to strong heat. Urea should not be mixed with other chemicals, mixing with Nitric acid may be particularly hazardous.

Buildings and areas for storage or handling of fertilisers should be secured properly to keep unauthorised people away. fertilisers containing ammonium nitrate or other nitrates can be used to manufacture explosives, which has occurred in several terror attacks worldwide.

The availability of such products is therefore restricted by law. Mineral fertiliser containing 16% or more ammonium nitrate is not available to the public. Only farmers and other professional users are given access to such products. (EU Regulation 1907/2006, REACH)

Do not sell fertilisers on to someone if you are not sure whether it will be used professionally.

You are currently at Yara India